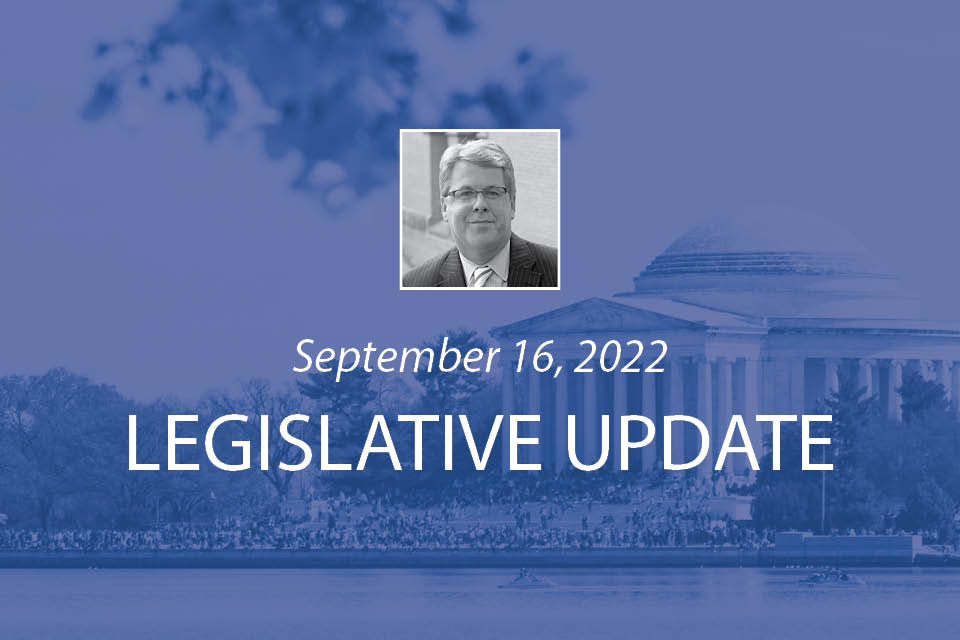 The focus in Congress and the Administration this week has been trying to head off a work stoppage by members of unions representing workers employed by the Class 1 railroad companies. This issue has been percolating for several weeks as a “cooling off” period that kicked in mid-August was slated to end today. A Presidential Emergency Board (PEB)—which was put in place to serve as an intermediary and forge a consensus among the two sides—had proposed significant wage increases for rail workers that would be applied retroactively. All but two of the unions accepted the terms of the PEB proposal; however, the two holdouts were the largest of the rail worker unions. The issues that were not addressed to the satisfaction of these unions were around life/work balance issues such as adequate time off with pay. Significant rail worker cut backs that occurred during the pandemic have resulted in limited flexibility as demand for freight shipments has resumed to pre-pandemic levels. Rail conductors and engineers have complained that they are afforded virtually no time off and that failure to accept a shift will lead to termination.

In Washington, panic started to set in this week as sectors dependent on freight rail for inbound raw material or shipping finished product to customers began to flood Capitol Hill with communications around the dire consequences a rail strike would have on the entire supply chain. The Class 1s terminated all new chemical shipments that were destined to travel over the rails in anticipation of a work stoppage. In addition, Amtrak cancelled all cross country routes. Companies that are reliant on rail began to shift scheduled freight shipments to trucks. Had a work stoppage occurred, this trend would have become a crisis for all segments of the supply chain—including our sector as demand for trucks would have far outstripped availability.

Thankfully, this labor crisis was averted. Early Thursday morning an agreement between the 13 rail unions and the Class 1 railroads was reached. The new contracts provide rail employees a 24 percent wage increase during the five-year period from 2020 through 2024, including an immediate payout of about $11,000. Of course, the agreements are subject to ratification by the unions’ memberships; however, it is expected that they will be ratified.

The one “must pass” deliverable for Congress this month is to pass a measure extending government program funding past September 30, after which the current budget expires. Since the Fiscal Year 2023 appropriations process is not close to being completed (the House has approved all of its FY 2023 appropriations bills, but the Senate has not even begun) Congressional leaders are looking for a short term stop gap measure known as a Continuing Resolution or CR. The proposal currently being discussed would fund the federal government through December 16. This will afford time for House and Senate negotiators to forge an omnibus spending deal that will provide funding through until next September.

A couple of items that are expected to ride on this CR include more funding for Ukraine in its war with Russia, additional pandemic relief money, disaster aid for communities in Kentucky and elsewhere that experienced flooding this summer and, possibly, an energy project permitting reform measure that Senator Manchin insisted on as part of his deal to get on board with the Inflation Reduction Act.

This latter item is drawing resistance from Senate Republicans who are frustrated with Senator Manchin’s support for the IRA and progressive Democrats in the House that do not support facilitating fossil energy development projects.

Negotiations are in full swing and, although an agreement has not been reached, we do not anticipate a government shutdown occurring, particularly this close to the midterm elections.

On Thursday, the House Small Business Committee’s Subcommittee on Innovation, Entrepreneurship, and Workforce Development held a hearing titled: “Back to School, Back to Startups: Supporting Youth Apprenticeship, Entrepreneurship, and Workforce Development.” In the notice announcing the hearing, committee leadership noted that “small- and medium-sized businesses are among the hardest hit by an ongoing shortage in skilled workers that predates the pandemic. In response, firms are exploring new ways to attract and retain a steady pipeline of workers. One strategy is through direct investment in workforce development, where businesses can help train workers by partnering with educational institutions to attract young people and improve their long-term viability. The hearing will explore innovative workforce development strategies targeted at young people that strengthen the labor force and expand opportunities.” The staff memo which accompanied the hearing notice (found here) echoes many of the themes that the lumber and building materials sector have noted over the last few years regarding workforce challenges.