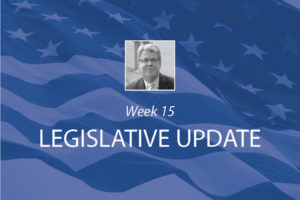 Congress confronted and addressed two of their outstanding deliverables for December, having passed a Continuing Resolution (CR) to keep the federal government running past December 3 when funding was slated to expire. The CR sent to the President on December 3, funds federal government operations through February 18. The other was the debt ceiling. Treasury Secretary Janet Yellen had predicted that the U.S. would exhaust its borrowing authority on December 15. On Tuesday this week, the Senate passed a $2.5 trillion measure and the House followed suit on Wednesday, December 15, sending the measure on to the President. The legislation is expected to keep the debt ceiling issue off the table until 2023.

In the midst of moving these two critical measures, Senate negotiations have been in hyper drive on the Build Back Better Act which passed the House. Last weekend, the Chairman of the Senate Finance Committee Senator Ron Wyden (D-OR) released a 1,180 page bill that represents the Senate’s latest thinking. The proposal reflects modest changes to the House-passed product and is not the final version of what Senate will ultimately consider, as other issues like state and local tax (SALT) tax deductions, child care tax credit and a few other issues remain open. Upon review, it appears that provisions affecting S Corporations and pass throughs are not modified in the Wyden version. The measure still increases the tax rate on pass throughs by over 10 percent.

ABMA sent a letter to Senate Democrat offices opposing revenue raisers on pass through businesses and explaining that these provisions have an inordinately negative impact on small and medium-sized companies. We have since followed up with meetings with staff from various Senate Democrat offices to underscore our concerns and explore opportunities for modifying the proposal. The sense we are getting from staff is that tax provisions in the bill are going to be difficult to change. We have heard feedback that the measure has been significantly improved from the version that passed the House Ways & Means Committee with the removal of stepped up in basis provisions and provisions lowering estate tax exemptions and problematic grantor trust language.

While that is true, the fact remains that taxes will still increase considerably for main street businesses if this proposal is enacted. To that end, ABMA will continue to keep pressure on Senate Democrat offices to express our opposition to these increases and seek modifications.

In terms of consideration in the Senate, leadership had hoped to have a deal and begin Senate floor consideration before Congress breaks for the Christmas holiday. That is not happening at this point. Senator Joe Manchin (D-WV) continues to raise issues with the bill and has withheld his support. Leadership is now hoping that a deal may be forged sometime in February before the State of the Union address.

The longer this proposal lingers without action, the more likely it is to fail. At the very least, it appears that our advocacy window on this bill will extend into January and potentially beyond. ABMA will continue our outreach to Senate Democrats and we will keep you apprised of our progress.

On Thursday, the Biden-Harris administration outlined measures factsheet to strengthen the trucking workforce. The plan identifies four actions that will take place over the next 90-days. These are: