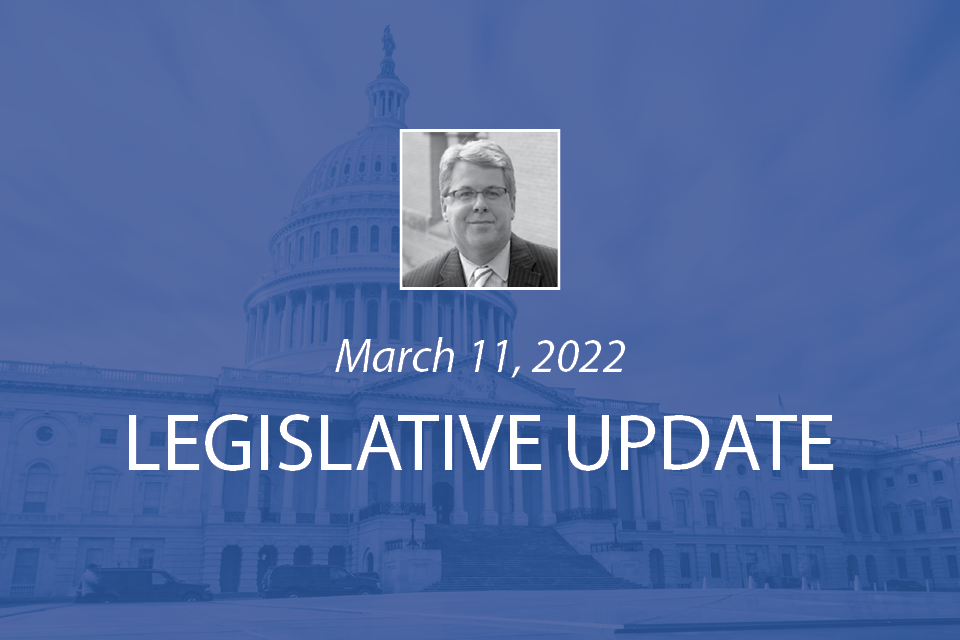 On Wednesday, the House passed a $1.5 trillion Fiscal Year 2022 omnibus spending measure (H.R. 2471) that will fund operations of the federal government through September 30. The House also passed by voice vote a stopgap measure to fund the government through March 15, in case the Senate is unable to clear H.R. 2471 by midnight Friday, when current government funding expires.

Included in the package is $13.6 billion in aid for Ukraine and, for the first time since 2011, the measure includes earmarks, now referred to as “congressionally-directed spending.” What was left out of the package was $15.6 billion in additional Coronavirus aid after Democrats complained that it included $7 billion in rescissions of previously appropriated aid for state and local governments. The bill also includes $12.6 billion for the Internal Revenue Service, a spending increase of $675 million over FY 2021 levels. The new funds are designed to help the beleaguered IRS increase staffing in an attempt to manage the substantial back log in unprocessed tax returns, among other things.

Importantly, the omnibus bill fully funds the investments in infrastructure enacted as part of the Infrastructure Investment and Jobs Act signed by the President in November. The Senate is working towards a vote on the measure, but leadership has indicated that the process may take the upper chamber into the weekend for a final vote. The bottom line, however, is that there will be no federal government shutdown and that Congress will finally close the books on the drawn out FY 2022 appropriations process in the next few days.

House Republicans have drafted legislation that would ban importation of wood and wood building materials originating from Russia. Text of the measure is still being negotiated, but a draft that is circulating would require the President to impose a ban on Russian wood imports and make up the supply difference by expediting timber production on U.S. federal lands.

The measure is not likely to move in the Democrat-controlled House, but will serve as a messaging bill on the Russian-Ukraine crisis and the need to more effectively manage federal forest lands for timber production in the U.S.

This week, ABMA signed onto a letter to House and Senate leadership advocating for fully reopening the U.S. Capitol complex to receive visitors. In outreach to House and Senate offices, the case is being made that members of the press are currently allowed unfettered access to House and Senate office buildings and contractors working on these building are afforded this same access. The effort is underscoring the message that, after two years of the pandemic with Coronavirus case numbers plummeting in Washington, D.C. and surrounding areas, it is time to execute a plan to fully open the Capitol complex so that U.S. citizens’ right to petition the federal government may be fully restored.