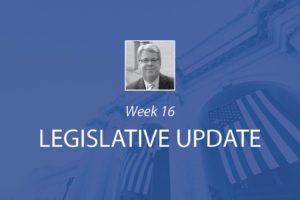 Over the weekend, Senator Joe Manchin (D-WV) dealt what could be a fatal blow to President Biden’s comprehensive social spending plan—the Build Back Better Act. The Senator had been signaling for months that he has concerns with the legislation, namely that spending in the bill would threaten to further drive inflation. Although the legislation is being pursued through the budget reconciliation process that requires a mere simple majority instead of the normal sixty votes to clear the upper chamber, every single Democrat must be on board as all Senate Republicans have vowed to oppose the bill. After unproductive discussions with the President last week, Senator Manchin concluded that he cannot support the bill in its current form, which left the White House and Senate Democrat leaders reeling in terms of next steps.

The bill is a mixed bag of favorable and unfavorable provisions. While it does include meaningful funding for Career and Technical Education and other workforce development priorities, the bill includes problematic revenue raisers on Main Street businesses. As we have highlighted, the bill would increase taxes on S-Corporations and other pass-through entities by over 10 percent, leaving small and medium sized businesses on the hook disproportionately for funding the many programs in this measure.

ABMA has communicated our opposition to these revenue raisers in letters to Capitol Hill as well as meetings with Senate Democrat offices. We will continue to keep the pressure up as we enter the new year and negotiations shift toward a modified Build Back Better package.

Again, the path forward for this bill is uncertain at this point. The House and Senate have left town until January. Over the weekend, Majority Leader Chuck Schumer (D-NY) signaled that the Senate would vote on the Build Back Better Act in its current form in early January despite Senator Manchin’s opposition. This suggests that efforts will be made to trim the package once that vote fails. ABMA will be close to the action and engaged with our champions on Capitol Hill. We will keep you regularly apprised of developments and may seek your grassroots lobbying assistance depending on what direction policymakers take with this measure.

Specifically, the bill would:

The bill is pending in the House Education and Labor Committee.

On December 15, the U.S. Senate voted 89-10 to pass the “National Defense Authorization Act” (NDAA) (H.R. 4350), a $768 billion defense policy bill. Riding on this legislation is wood products industry- supported language authorizing a pilot program to evaluate the use of more “mass timber” in military construction. The term “mass timber” includes cross laminated timber and other innovative wood products that are becoming increasingly attractive to architects and builders due to their superior strength, fire resistance, ease of use at the construction site, cost effectiveness compared to competing building materials and their superior performance from a greenhouse gas mitigation perspective.

The legislation awaits the President’s signature.

Legislation (H.R. 4996) to address congestion at our nation’s ports passed the House earlier this month by an overwhelming margin—364-60.

The Ocean Shipping Reform Act is aimed primarily at ocean freight carriers and eliminating the current practice of unloading at U.S. ports and heading back to Asia with empty containers to facilitate a quick turnaround time for returning to the U.S. In-bound ocean freight–freight coming to our ports from overseas, namely Asia—is orders of magnitude more profitable for the ocean carriers than outbound. This practice has left domestic shippers in a precarious, uncompetitive situation.

The legislation specifies that ocean carriers may not refuse export bookings and limits their ability to impose demurrage and detention fees—industry parlance for late fees on shippers. The bill also imposes minimum service standards on ocean carriers and, overall, provides more authorities to the Federal Maritime Commission to better quarterback what is happening at our nation’s ports.

The National Retail Federation is a strong supporter of the legislation and is among many business and industry groups that are lobbying to advance the measure.