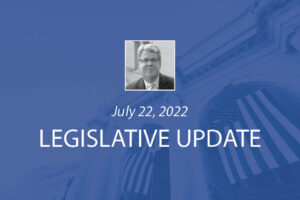 This week, Senator Joe Manchin (D-WV) announced to Senate Democrat leadership that he could not support inclusion of climate and renewable energy tax credits in the BBB 2.0 package that has been the subject of high level negotiations for weeks. Senator Manchin had previously signed off on these provisions and it was assumed that they would be a centerpiece of any deal that is forged. He indicated that his course correction was due to ongoing concerns about inflation and that additional spending in the bill in this area threatened to exacerbate the situation. The development was a considerable setback for President Biden and Senate Majority Leader Schumer who need all 50 Senate Democrats to support a bill in order to clear the Senate through the budget reconciliation process.

In response, legislation is now being prepared to address the two remaining issues for which Senate Manchin has committed his support—a prescription drug pricing proposal and a measure that would extend for two years Affordable Care Act subsides that are set to expire next month. The expectation is that this slimmed down bill—which represents a fraction of the original, House-passed BBB—will pass Congress before the August recess.

While Senator Manchin has signaled that he is willing to revisit the climate and tax provisions in September if inflationary data improve, that scenario is highly unlikely given the dwindling number of legislative days Congress is in session and the fact that the budget reconciliation process consumes an inordinate amount of floor time. As always, ABMA is close to the action and communicating our message to champions in the Senate and House. We will keep you apprised of developments.

Bipartisan legislation is being readied by two House members that preserve the ability of employers to use independent contractors, while also providing some protections typically provided to employees. The bill, which has not yet been introduced, is being led by Representatives Henry Cuellar (D-TX-28), Elise Stefanik (R-NY-21), and Michelle Steel (R-CA-48). The legislation would authorize a new type of work arrangement called a “worker flexibility agreement” that would feature the following:

Under a “worker flexibility agreement,” the worker would not be treated as an employee for federal tax purposes or under the Fair Labor Standards Act. Additionally, a worker’s choice to work flexibly under an agreement would be protected by superseding state and local wage and hour and tax laws that would otherwise force the individual to be treated as an employee. This provision was included to address situations like California and Massachusetts which have enacted broad “ABC” tests, which make it harder to classify an individual as an independent contractor.

The legislation is being supported by the Coalition for Workforce Innovation, whose members include ride sharing entities like Uber and Lyft, but also groups representing the construction sector, including the Associated Builders and Contractors.

ABMA met this week with the newly created office in the White House established to guide implementation of recently enacted Made in America directives. Included within last year’s infrastructure bill (the Infrastructure Investment and Jobs Act (IIJA)) were a number of Buy American provisions, including language to address construction materials such as lumber and drywall. Previous Buy American measures only applied to iron, steel, and certain manufactured materials. During the meeting, staff indicated that they are in the process of formulating standards and definitions for “lumber” and are interested in the lumber and building materials industry’s input. Staff expressed the opinion that in order for lumber to be considered domestically produced, it would have to be derived from a tree seed or seedling planted on U.S. soil. Staff also noted the potential need for multiple definitions of lumber to include engineered wood and composite panels. In terms of timing, the proposal is expected to be published in the Federal Register for public comment sometime in September.