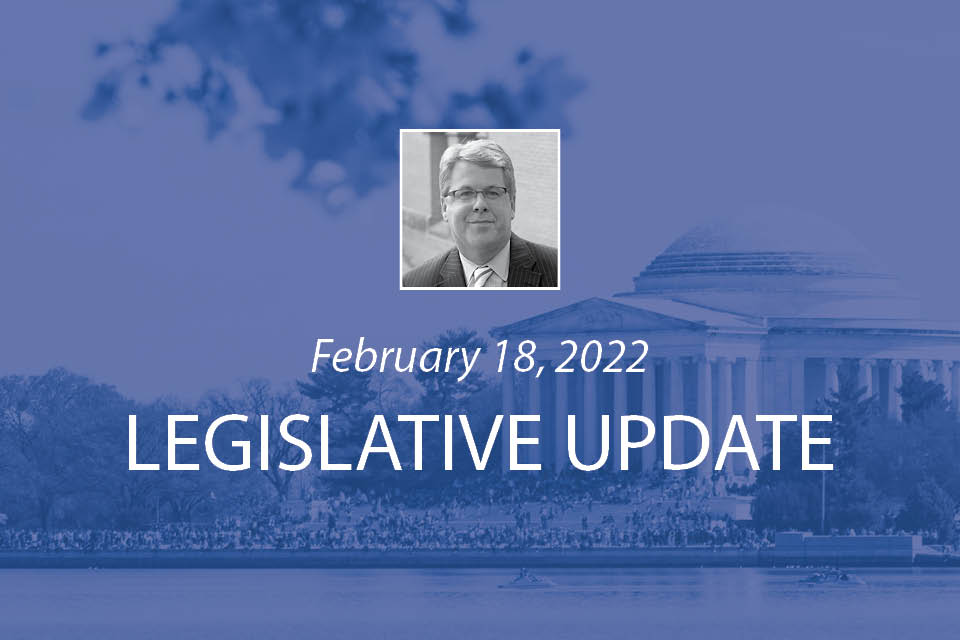 With the House in recess this week, the Senate was in session processing Biden Administration nominations and working to close the deal on a government funding measure. The federal government is funded through today, February 18, but the short term Continuing Resolution, or CR, that has kept the doors to federal departments and agencies open expires at midnight tonight. Another short term CR—funding the government through March 11—was finally enacted last night. This action will buy time for appropriators to finalize a 2022 omnibus appropriations bill that will provide funds for all federal departments and agencies and the programs they administer through September 30 of this year. House and Senate leaders have agreed to a high level framework of a spending deal with top line figures, but Appropriations Committee and leadership staff have been tasked with formulating details of the package.

There is considerable pressure to secure an omnibus appropriations deal and get it enacted expeditiously. One of the primary drivers is that the many programs authorized by last year’s bipartisan infrastructure law rely on an influx of increased appropriations that an FY 2022 bill would deliver. If Congress simply enacted a yearlong Continuing Resolution which it appeared poised to do a few weeks ago, that action would lock in federal government funding at 2021 levels and would essentially render the infrastructure law and its historic investment in our roads and bridges moot.

In typical fashion, Congress waited until the last possible moment to act on this short term CR, but it will became law today and we expect that an omnibus FY 2022 appropriations bill will surface shortly and be enacted prior to March 11. At the conclusion of this exercise, Congress will then turn to the FY 2023 appropriations cycle which kicks off in early March.

The President’s signature social spending and tax plan that passed the House remains stalled in the Senate. Senator Joe Manchin (D-WV) continues to make public remarks about the proposal that create uncertainty on a path forward for this legislation.

In media interviews last week, he recommended that, among other things, the bill should raise the corporate tax rate to 25 percent from the current 21 percent under the Tax Cuts and Jobs Act. In addition, he would like to see an increase in the top capital-gains rate to 28 percent from 23.8 percent. These two proposals were omitted from the House-passed bill due to significant opposition and recognition by House leaders that including them would doom the bill in the Senate.

In fact, the other Democrat Senator who has helped Senator Manchin in keeping this bill bottled up–Senator Kyrsten Sinema from Arizona–has been adamantly against any increase in the corporate rate.

So to recap, Senator Manchin is now calling for an increase in the corporate tax rate knowing full well this is a poison pill for his Democrat colleague Sen. Sinema. This dynamic alone makes it difficult to chart a path forward for the legislation. Further clouding the picture is Sen. Ben Lujan’s (D- NM) medical condition which is currently precluding him from participating in Senate business, which deprives Democrats of their majority in the upper chamber.

ABMA met with Senate Finance Committee Republican staff earlier this week to discuss the Build Back Better legislation. The meeting confirmed what we have been hearing in our visits with individual Senate offices that Democrats appear to be fully on board with all of the existing revenue raisers in the House passed BBB bill.

The challenge continues to be for Congressional Democrat leaders to find the right cocktail of provisions acceptable to all in the caucus and then pair these provisions up with appropriate pay fors. What you might see is a pared down version of the bill with a mix of climate change provisions and renewable energy tax breaks among other items. These are areas where Sen. Manchin has signaled his strong support.

ABMA will continue our visits with key Senate offices advocating that any slimmed down proposal is not funded on the backs of small and medium sized businesses—mainly through increased taxes on S-Corps and other pass through tax structures. In terms of timing, Congressional staff have been opining that if this bill remains stalled into late April or early May, action is unlikely on the Build Back Better Act. Several factors are in play, including that it is an election year and Members are eager to get home and campaign. Also, the Senate calendar will become crowded, particularly with a Supreme Court nominee confirmation proceedings. So, the bottom line that we are hearing is if this bill or an iteration of it does not move in the next two months it is dead for 2022.