OSHA and National Oceanic and Atmospheric Administration (NOAA) are working together on a public education effort aimed at improving the way people prepare for and respond to severe weather.

ABMA’s “Inside The Capitol” Debuts 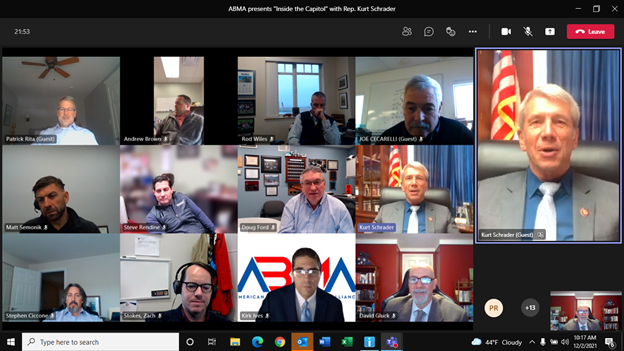 On December 2nd, the ABMA launched “Inside the Capitol”; a virtual event series. Our first guest was Congressman Kurt Schrader (D-OR).

Earlier this week, the ABMA sent a letter to the Senate outlining our concerns with tax provisions in the Build Back
Better (BBB) legislation recently passed by the House. If enacted, the tax rate for small and medium sized businesses could jump to over 41 percent—a sizable increase for LBM businesses.

The United States Department of Commerce announced late last week that they would proceed with an administrative review to increase the tariffs on Canadian lumber shipments from 9% to 17.9%.