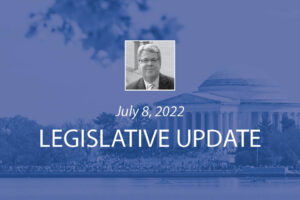 Negotiations are slowly progressing on a slimmed down Build Back Better bill that Democrat leadership in the Senate hope to unveil in the next few weeks and pass before the August Congressional recess.

This week, Senate Democrats sent the prescription drug pricing piece of the proposal to the Senate Parliamentarian for review to ensure that the measure satisfies germaneness requirements of the budget reconciliation process. Recall that the only way this next iteration of BBB clears the upper chamber is through budget reconciliation, a parliamentary move that allows legislation to pass with only 50 votes in the U.S. Senate.  However, there are fairly strict rules around what may or may not be included in reconciliation—namely only those proposals that have a budgetary or revenue impact may ride on the reconciliation process. The prescription drug pricing component is the first piece to undergo what is known as the “Byrd Bath,” named after former West Virginia Senator Robert Byrd who shepherded rules through Congress to ensure that the budget reconciliation process could not be used on just any legislative measure.

The other pieces of BBB 2.0 will be related to climate change and renewable energy tax credits, as well as incentives for fossil fuel production. We also understand that there will be considerable deficit reduction provisions in this next round, but the substance of those has not been released. It is also unclear what “pay fors” or tax provisions will be included in the package; however indications are that the expanded Net Investment Income Tax (NIIT) proposal that was a centerpiece of the House-passed Build Back Better legislation is being resurrected. Staff is expected to submit the NIIT increase to the Parliamentarian next week when Congress returns from its July 4 recess. Recall that this proposal would add a 3.8 percent NIIT to S corporation and partnership income earned by active owners of the business. Currently, active owners of these businesses do not pay the NIIT on their business’ profits. This expanded tax would apply to owners with incomes exceeding $400,000 (single) and $500,000 (joint), but for business shares held in trust, the expanded tax applies to income of only $13,000 and over.

ABMA has been advocating throughout this process that the original BBB or any of its offspring not be funded on the backs of small to medium sized businesses. We are looking to coordinate with our coalition partners, such as the S Corporation Association and the Family Business Estate Tax Coalition, to oppose this tax proposal and any others that emerge affecting Main Street businesses.

Late last week, the House Appropriations Committee approved a Fiscal Year 2023 appropriations bill for the Departments of Labor, Health and Human Services and Education. The bill includes a $45 million increase to the Perkins Basic State Grant program that funds career and technical education programs around the country. The legislation also includes $50 million to stand up the Biden Administration’s Career-Connected High Schools initiative, a competitive grant program focused on reimagining high school to postsecondary transitions by encouraging partnerships across secondary education, higher education and employers to support early enrollment in postsecondary and career-connected learning for students in grades 11 through 14. Overall, the bill provides a 15 percent increase to the Department of Education’s budget and a 12 percent increase to the Department of Labor.

In addition, the bill includes the following increases for postsecondary education and workforce: