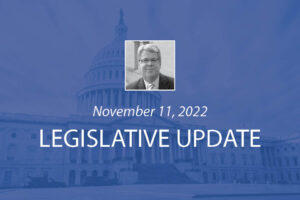 While results of the midterm elections on Tuesday are still being sorted out, it is clear that a vast majority of political experts and prognosticators were off in their predictions…..again. The conventional wisdom was that Republicans would pick up about 20 seats in the House and also take the Senate by a slim margin. Many were predicting a sizable red wave in the neighborhood of 30-35 House seat gains by the GOP and a pick-up of 3 or 4 seats in the Senate. By Tuesday, it seemed like all variables were breaking in the GOP’s favor.

Going into the election, Democrats were fighting historical trends where a sitting president loses seats in his first midterm. President Obama got “shellacked” in 2010, losing 63 seats. President Trump lost 40 in 2018, and President Clinton lost 52 seats in 1994. Exacerbating this is the current economic climate, with inflation at 40 year highs, gas prices still punishing and interest rates climbing. Couple these factors with a sitting President whose approval rating is in the high 30s and the narrative was set for Tuesday to be a very good night for Republicans. But then the voters, not the pundits, spoke.

We will not know the final results for several days it appears, but it is safe to conclude that the “red wave” that was anticipated did not materialize. The GOP is expected to take the House of Representatives, but by a far slimmer margin than expected. At this point, it looks as though Rep. Kevin McCarthy (R-CA-23) will become the House Speaker, but will be holding onto the slimmest of margins—in the low single digit range.

In the Senate, control hangs in the balance as returns are still being processed in Arizona and Nevada, and a runoff election will take place in Georgia to determine the outcome in that race. ABMA is following the action closely and will provide updates on developments as they unfold.

There were some key takeaways from Tuesday. First, it was a good day for democracy. Voter interest and turnout was high signaling that Republican and Democrat voters believe their vote matters. And across the board, candidates that lost their races conceded gracefully. This is positive.

Second, it was a very good night for Florida Governor Ron DeSantis. Not only did he defeat his opponent by 20 points, but the GOP will occupy 22 or the state’s 30 Congressional seats. The evening was so positive for DeSantis that the New York Post dubbed him “DeFuture.” He certainly appears to be the GOP frontrunner for the Presidential race in 2024 coming out of Tuesday night.

Third, candidate quality is critical. Both parties could have prevailed in select races across the country with candidates boasting better credentials and experience.  Conversely, several candidates running in challenging districts for their party prevailed largely on their strong backgrounds and ability to read the voters in their district.

What Does the Election Mean for ABMA?

Assuming the GOP takes control of the House, ABMA looks forward to working with Republican House members that will be elevated to lead key Congressional committees important to the forestry and forest product supply chain policy agenda. As we have mentioned, Rep. Bruce Westerman (R-AR-04) will take the helm of the House Natural Resources Committee. Mr. Westerman is the only forester in the House and will be leading a panel that oversees federal forest management policy, Endangered Species Act issues and other upstream issues of interest to the LBM industry.  Rep. Westerman authored the Trillion Trees Act in the 117th Congress—the GOP leadership’s climate change bill which included a tax credit for wood building materials– and has proven to be a strong supporter of our sector in his time in Congress.

Similarly, Rep. Glenn “GT” Thompson (R-PA-15) will become Chairman of the House Agriculture Committee. In this role, GT and his team will be leading efforts to reauthorize a Farm Bill which expires next year. The Farm Bill is a must pass measure that includes several titles that are critical for our sector, including provisions that incentives the use of wood building materials. Like Bruce Westerman, we have worked closely with GT on issues ranging from forestry to Endangered Species Act to workforce development.  On the latter, GT co chairs the House Career and Technical Education (CTE) Caucus and workforce issues are a passion of his.  In fact, he also sits on the House Education and Labor Committee and would be in the majority on that panel should the House change control. He and his staff have been strong supporters and we are excited to work with them in their new roles as we head into the 118th Congress.

Again, as the final results of this election become clearer, ABMA will provide continuing analysis on what these results mean for us and our policy agenda in 2023.