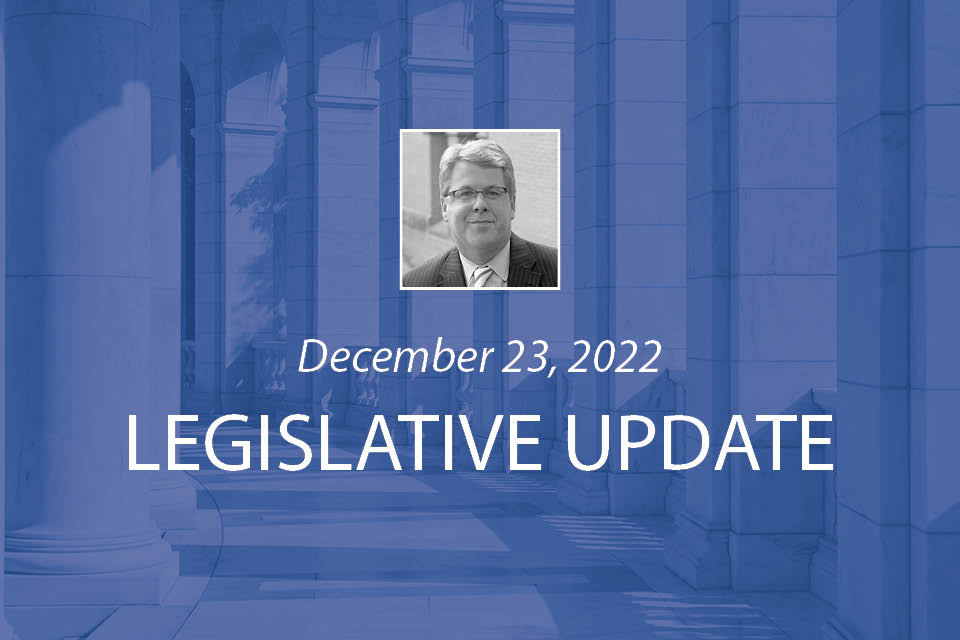 The Final Act of the 117th Congress

This morning, Senate Democrat leaders signaled that they had found a path forward to move the $1.7 trillion Fiscal Year 2023 omnibus spending bill. The upper chamber was supposed to approve the measure last night, but there was a snag related to U.S. border protections. Specifically, the issue is around a Covid/Trump era policy that allows for immigrants to be denied access to the U.S. due to the threat of spreading infectious disease. Known as Title 42, these restrictions were supposed to be lifted yesterday. However, a court granted a temporary extension of Title 42 so that the Supreme Court could review it. In the context of the omnibus negotiations, Sen. Mike Lee (R-UT) filed an amendment to extend Title 42 indefinitely and was pushing for a simple majority vote on the measure. Senate Democrat leadership was insisting on a 60 vote threshold out of concern that Senator Lee’s amendment would attract the support of at least one Democrat Senator and inclusion of this amendment was viewed as a poison pill as it would doom the overall omnibus package’s prospects in the House. The issue was resolved this morning with Senate leaders agreeing to let the Lee amendment be voted on with a simple majority rule while an alternative amendment offered by Senator Kyrsten Sinema (D-AZ) and Jon Tester (D-MT) also receiving a vote. The latter would simply provide more funding for border security.  Both amendments are expected to fail, but the votes allow each party to stake out their positions on the issue.

In terms of process, the Senate will hold a final vote later today and send the package to the House for approval later tonight. This will be the final act of the 117th Congress.

While we were working hard toward including an extension of full expensing /bonus depreciation as part of the omnibus, a tax title did not come together unfortunately.  Democrats were pushing for an enhanced Child Tax Credit which was going to be the basis for a broader package of tax extenders, including bonus depreciation.  Agreement could not be reached on the Child Tax Credit and negotiations faltered.  ABMA will be working next year in the new Congress to enact an extension of the 100 percent bonus depreciation and apply it retroactively.

Also left out of the final deal is the Jumpstart our Businesses by Supporting Students (JOBS) Act.  This bill would make high-quality, shorter-term education and training programs eligible for federal Pell Grants. It enjoyed bipartisan, bicameral support and has been a priority for workforce development advocates. Although existing workforce development programs authorized by WIOA—the Workforce Innovation and Opportunity Act—are fully funded in the omnibus, ABMA was hoping the final deal would include language from the JOBS Act.

ABMA staff is still combing through the 4,200 page bill, but a few provisions of interest that are important to our upstream suppliers are:

Biomass:   The proposal reauthorizes the current directive that the U.S. Department of Agriculture, Environmental Protection Agency and the U.S. Department of Energy recognize the carbon neutrality of forest-based biomass fuels and energy in any energy or environmental policymaking at the federal level. This appropriations “rider” has been a target of environmental groups that oppose combusting biomass for energy, such as burning sawdust at a sawmill to heat and power the facility.  In fact, for the last several appropriations cycles, attempts have been made to water down language in the rider to recognize only “carbon benefits” of biomass, but ignore that fact that energy derived from biomass combustion is carbon neutral. Senator Susan Collins (R-ME) has worked tirelessly to ensure that the existing biomass carbon neutrality directive remain unaltered and extended through the next fiscal year.

The omnibus extends the Secretary of Homeland Security’s authority to increase the number of H-2B visas permitted each year by about 65,000 visas.  As part of this provision, the language around staggered crossings, the use of private wage surveys and a 10-month season are also extended. Guestworkers are critical for the forest products sector as these workers are relied upon to hand plant tree seedlings following a timber harvest. Each year there are insufficient numbers of visas granted to allow these workers into the country. This provision will provide some relief to the guestworker visa cap.

One last item of note in the omnibus is that it includes provisions of the Growing Climate Solutions Act, a bipartisan bill that authorizes the US Department of Agriculture  to register technical service providers to help farmers and forest landowners implement greenhouse gas mitigating/sequestration practices on their lands to generate credits in voluntary carbon markets.  This bill has been a priority of the forest landowning community who are looking to monetize their timber holdings in the carbon credit market.

With the upcoming retirement of Rep. Jim Langevin (D-RI) at the end of the 117th Congress, the search has been ongoing for a Democrat Member of Congress to succeed him as co-chair of the House Career and Technical Education (CTE) caucus. That search has concluded with the announcement last week that Rep. Suzanne Bonamici (D-OR) will become the new Democrat lead on this important panel when the 118th Congress is gaveled in next year. Rep. Bonamici represents the 1st District, situated just north of Salem and ranges from Portland to the coast.  One of the key committees she sits on is the House Education and Labor Committee, which will be leading efforts next year to reauthorize the Workforce Innovation and Opportunity Act (WIOA)—the central statute that guides workforce and apprenticeship policies in the U.S.

The bipartisan CTE Caucus plays an important role in helping raise awareness among federal lawmakers about the need for investments in CTE and the benefits these investments deliver for employers. The Caucus conducts briefings for Members and their staff on a periodic basis and serves as a readymade “go to” group of lawmakers we may approach to lead on workforce development policy. Rep. Bonamici is a long time supporter of the wood building products industry and we look forward to working with her in her new role.  Rep. Glenn “GT” Thompson (R-PA) will continue to serve as the Republican co-chair.