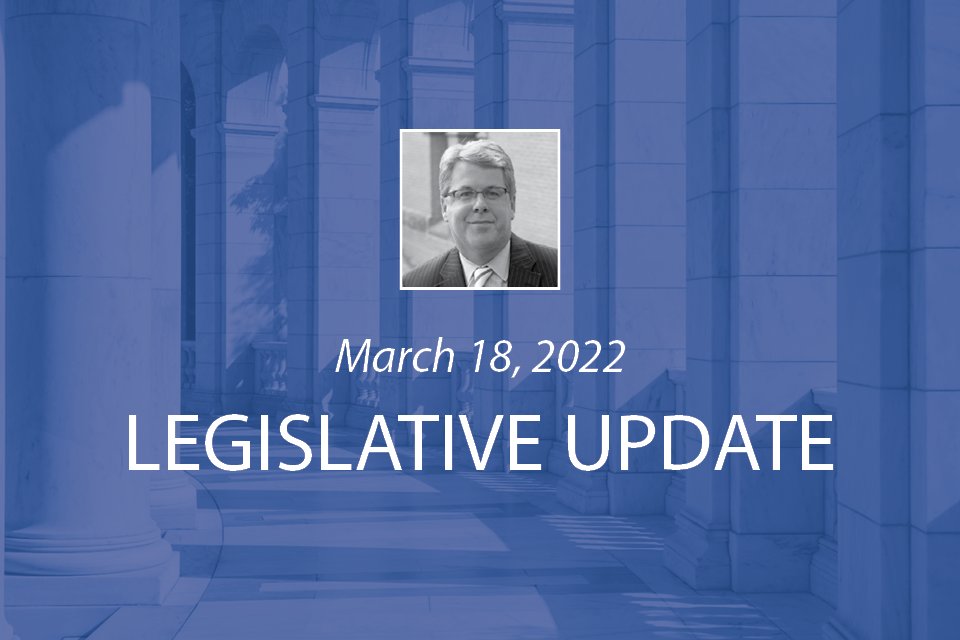 War in Ukraine Looms Over Congress

The focus this week in Washington has been on the deteriorating situation in Ukraine and steps the United States can take to help the besieged and fortify Ukrainian defenses. Ukrainian President Volodymyr Zelensky addressed a joint session of Congress on Wednesday to plea for help from the U.S. Following that address, President Biden signaled that the Administration would provide $800 million in security assistance on top of the $200 million in arms and military equipment that was enacted as part of a short term stop-gap funding bill signed earlier in March.

On Thursday, the full House is taking up legislation to end normalized trade relations with Russia and Belarus. Removing Russia’s “most-favored-nation” trade status would enable the U.S. to impose higher tariffs on Russian goods and take other actions. The bill will also include an expansion of the Global Magnitsky Human Rights Accountability Act, allowing the Administration to impose further sanctions on Russian officials for human rights violations.

President Biden last week announced that the U.S., along with other G-7 and European Union countries, would revoke the status in response to the invasion of Ukraine, putting Russia in the same category as other pariah states including North Korea and Cuba. Revoking normalized trade status, however, necessitates Congressional action.

On Thursday, the full House is scheduled to take up H.R. 963, the Forced Arbitration Injustice Repeal (FAIR) Act. The bill, which passed the House in the 116th Congress, would ban businesses from including mandatory arbitration clauses in contracts with employees and consumers. Proponents of the legislation claim that mandatory arbitration clauses erode the rights of individuals to pursue legal action and participate in class-action lawsuits in case of employment, consumer, antitrust, and civil rights disputes. The bill would allow employees to sue their employers in cases of wage disputes, harassment or discrimination, or customers to sue companies over fraud, privacy violations, product liability, and more.

The bill boasts 203 cosponsors—all Democrat with one exception, Rep. Matt Gaetz (R-FL). Although the bill has a Senate companion, S. 505 sponsored by Sen. Richard Blumenthal (D-CT) and cosponsored by 39 Democrat Senators, it is unlikely to move in the upper chamber.

On Thursday, IRS Commissioner Chuck Rettig is appearing before the House Ways and Means Committee as the agency continues to struggle under considerable back logs in processing tax returns from the 2021 filing season. The backlog, fueled by pandemic complications, has held up millions of tax refunds and credits for individuals and businesses. Now, in the third year of the pandemic, it exceeds 20 million unprocessed returns and other taxpayer mail. Rettig is expected to be grilled by both Republicans and Democrats on the committee.

There has been bipartisan pressure on the IRS to take additional action to cut the existing backlog and improve customer service, beyond steps Rettig has already taken. The Commissioner has shifted workers from their current jobs to processing roles, launched new hiring plans and reduced the volume of letters the IRS has been automatically sending taxpayers.

Rettig has held in the past that longstanding funding cuts and staff reductions to the agency have crippled its functions further. Congress has yet to agree to an increase in funding for the IRS — a boost that Republicans have opposed — aside from the 6 percent increase passed in the omnibus bill last week.

This week, the U.S. Senate passed the Sunshine Protection Act (S. 623), Senator Marco Rubio’s (R-FL) bill to lock in daylight savings time and end the practice of the “spring forward/fall back” clock resetting ritual. Specifically, the legislation would move standard time forward by one hour, which would have the effect of making daylight saving time permanent across the country. States would have the option of remaining on current standard time, but no state would be allowed to shift from one time to the other during the course of a year. The Senate bill proposes that the change would take effect in November 2023, a delay meant to give airlines and other businesses time to prepare for schedule changes. Although the bill enjoys bipartisan support in the House, the timing for its consideration is unclear in the lower chamber as House leaders were caught off guard by the expeditious consideration and approval of this bill.