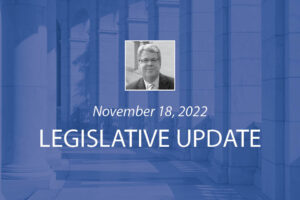 Both Houses of Congress returned to Washington this week and the big news was leadership elections. he House Republican caucus voted 188-31 to support current House Minority Leader Kevin McCarthy (R-CA-23) as the next Speaker of the House when Congress convenes the 118th Congress in January.

On Wednesday evening, the GOP picked up the final seat it needed to take control of the lower chamber with 218 seats. That number is expected to climb, but only slightly in the coming days. McCarthy was challenged by Rep. Andy Biggs (R-AZ-5), a House Freedom Caucus member who garnered the 31 votes. This is not insignificant. This week’s vote was just the Caucus vote and the one that counts will be in January. In order to secure 218 votes, Mr. McCarthy will likely have to make concessions to this faction of the party. There is also speculation that Rep. Jim Jordan (R-OH-4) will mount a challenge to McCarthy between now and January, which could further complicate the situation.

In the Senate, Senator Mitch McConnell was reelected by his caucus as Minority Leader. He was challenged by Senator Rick Scott (R-FL), who received 10 votes.

On the Democrat side, leadership elections are scheduled for next week. Yesterday, House Speaker Pelosi announced that she is stepping down at the conclusion of this Congress and House Majority Leader stated that he is not running for leadership. While the former was anticipated, the latter was a bit of a surprise. Leader Hoyer has thrown his support behind Rep. Hakeem Jeffries (D-NY-8), the current Chairman of the House Democratic Caucus, to become the Minority Leader in the 118th Congress.

The Lame Duck session has officially begun, with Congress needing to fund the government past December 16 and pass a defense authorization bill. Those are the two “must pass” items.   Potentially on the agenda is a tax package that may address the child tax credit—a high priority for Democrats—that would be paired with extensions to tax benefits under the Tax Cuts and Jobs Act. ABMA is working directly and with other similarly situated industries and coalitions to promote extension of the 100 percent bonus depreciation provision that allows companies to fully write off the cost of machinery and equipment in the year in which they are purchased.   We will keep you apprised of our progress.

Senators Introduce Bill to Rein In the IRS

This week, Senators John Thune (R-SD) and Chuck Grassley (R-IA) introduced a bill that seeks to put limits on how the Internal Revenue Service (IRS) may spend the increased funding it received under the Inflation Reduction Act (IRA). Under the legislation, the IRS Commissioner would have to submit a detailed annual plan to Congress on how the agency will spend an additional $45.64 billion for enhanced enforcement and tax collection efforts, $25.34 billion for operations support and $4.75 billion for the modernization of the IRS’s business systems.

The plan would need to be submitted every year on the same day that the president releases his proposed government budget for the next fiscal year. Senator Thune had this to say about his bill:

“The Democrats’ attempt to supersize the IRS without holding the agency accountable to Congress and American taxpayers is dangerous and irresponsible.  This legislation would provide much-needed oversight of the unprecedented $80 billion in new funding to the agency, more than half of which Democrats have directed toward enforcement-related measures, including audits. If our bill becomes law, the Biden administration’s IRS would have to answer to the American people, not Washington bureaucrats.”

In addition to the annual plan for how the agency intends to use the new IRA funds, there is language in the bill subjecting the plan to a new joint resolution of disapproval if it is deemed unsatisfactory. The bill would also require quarterly updates from the IRS and U.S. Department of the Treasury to enable consistent and transparent evaluation of the plans, provide accountability for any misuse of funds, and guard against violations of taxpayer rights. Failure to submit timely and thorough plans or reports would result in financial penalties, including IRA funds being rescinded on a daily basis until the IRS complies with the reporting requirements The legislation is co-sponsored by U.S. Sens. John Barrasso (R-WY), Mike Braun (R-IN), Richard Burr (R-N.C.), Bill Cassidy (R-LA), Mike Crapo (R-ID), John Cornyn (R-TX), Steve Daines (R-MT), James Lankford (R-OK), Rob Portman (R-OH), Ben Sasse (R-NE), Pat Toomey (R-PA), and Todd Young (R-IN).