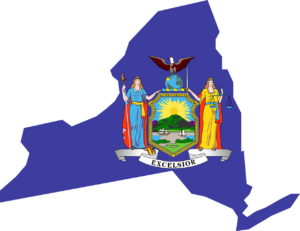 When Governor Andrew Cuomo resigned just over a year ago, Lieutenant Governor Kathy Hochul (D) became the Governor. This year she is running for the first time on her own for the position against Representative Lee Zelden (R) from Long Island. While many would say, and most polls agree, this election is a foregone conclusion with Hochul cruising to reelection, that doesn’t make it any less interesting.

It has not been smooth sailing for Gov. Hochul by any means. Within a year of appointing Brian Benjamin to serve as Lieutenant Governor, he was indited on bribery charges. Her first budget in spring 2022 was late, something that rarely happened under Gov. Cuomo, and she has had to struggle with the aftermath of some of Cuomo’s COVID-19 pandemic decisions, such as the nursing home scandal.

All of this, along with the fact that Hochul has never led a successful statewide ticket, leaves the race for Governor of New York one to watch.

Hochul is New York’s 57th Governor and the first female governor of the state. Her political career started when she served on her local town board in Hamburg, NY and then as Erie County Clerk. Hochul also served as a Congresswoman for New York’s 26th District from 2011 to 2013. “Given the district’s 40-year history of electing Republicans, the Democratic Congressional Campaign Committee took a hands-off approach to the special election… Hochul distanced herself from her party and cast the race as a referendum on the Republican Medicare overhaul, which both of her opponents supported. This tactic, combined with the in-fighting among local Republicans, led Hochul to an upset victory in the May 24, 2011, special election.”

Hochul lost reelection in a newly redrawn district in 2012. In 2014 she was elected Lieutenant Governor for the first time, and again in 2018.

Hochul was born and raised in Buffalo, NY, one of six children in an Irish Catholic family. Her political activism started early, volunteering for local politicians during her summer vacations. She has a B.A. from Syracuse University and her law degree from Catholic University in Washington, D.C. She married her husband, William J. Hochul, in 1984 and they have two children.

Zelden was born and raised on Long Island. He graduated from William Floyd High School, received his bachelor’s from SUNY Albany and his law degree from Albany Law School. Zelden served four years on Active Duty with the US Army, which included serving in Iraq in support of Operation Iraqi Freedom. He currently serves in the Army reserves. Zelden is married to his wife Diana, and they have twins – fifteen-year old daughters.

Zelden’s political life began in 2010 when he was elected to the NYS Senate. He was first elected to Congress in 2014 to represent New York’s first congressional district. Since 2010, he has won seven consecutive races in purple districts, unseating two Democrat incumbents along the way.

While many polls have the New York Gubernatorial race already wrapped up for Hochul, a recent poll indicates Hochul is only up by 4% over Zelden. There are possible issues with this poll since it was conducted by a more conservative organization, though Zelden and his team are taking it as a sign that New Yorker’s are ready for a change. And they might be right, since another early September poll has Hochul only up by 6% over Zelden.

But this is why this election is so interesting. It seems to be a forgone conclusion, but in a Midterm Election, with an untested incumbent, and an unpopular president, could 2022 be the year New Yorkers put a Republican in the Governor’s Mansion? Turnout could be the deciding factor:

New York has an average turnout rate of only 36.9% for Midterm Elections from 2002-2018, and if the Republicans can turn out their voters better than the Democrats this year, anything is possible even if it is not probable. Remember, Dr. Helmut Norpoth was one of only a few who predicted Donald Trump would win in 2016. The story this year in New York is: We will have to wait and see.