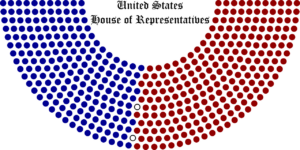 What About Control of the U.S. House?

Last week we talked about the possibility of the Republicans flipping the upper chamber. Unlike the Senate where only 35 seats are up for election, all 435 members of the House will be elected in November.

The Lay of the Land

The election between Josh Riley (D) and Marc Molinaro (R) for NY-19 is one that is being closely watched by many. The 19th was held by Antonio Delgado until he was appointed as the new Lieutenant Governor of New York this summer. Then the special election in August, which pitted Pat Ryan (D) against Marc Molinaro (R), led to Ryan’s victory.

The new NY-19 is more rural. However, the margin of victory of Biden in 2020 in the newly drawn 19th is larger than in the old 19th, indicating it should swing for Riley. However, with the margin in 2020 being so close, and this year supposedly favoring Republicans, Molinaro still has a chance, which is why this seat is rated as a toss-up.

The PA-8 and -17, as well as the ME-2, elections could be heavily impacted by turnout in the states since both also have gubernatorial elections in November. PA-8 and ME-2 are both currently held by Democrats despite the fact that former President Trump won those districts in 2020.

If the Republicans hold onto their safe and likely seats and win all 10 toss-up races, including six seats currently held by Democrats, they will only need to flip 6 other seats to gain control of the House of Representatives (218) this November. The recent generic polling about which party voters would support is mixed, with some showing a slight edge for the Republicans while others show the Democrats keeping control.