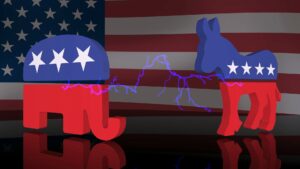 Who Will Control the U.S. Senate?

A few months ago, the answer to who would control the U.S. Senate after the General Election seemed to be a no-brainer: the Republicans. Inflation was raging, the stock market kept taking hits, the Senate could not seem to pass any bills, and the Biden Administration kept kicking the can down the road on student loans. Even the casual observer would have said it looked as if the Democrats were in for a licking at the polls.

However, over the last few months the Biden Administration has announced student debt relief, which is popular with younger voters who tend to be more liberal, and there have been some signs of inflation relief, especially at the pump. Could this lead to the Democrats retaining control of the upper chamber in Washington?

The Lay of the Land

This election cycle there are only 35 Senate seats up for election, 14 Democrats and 21 Republicans. This means if the Republicans want to win control of the Senate, they must not only win all 21 races for the offices they currently hold, but they need to defeat at least one Democrat. The Republicans are in a good position to do this despite recent “wins” for the Democrats.

Of their 21 seats, 15 are rated as safe for the incumbent and an additional two are rated as likely to stay in Republican control. This means the party only needs to focus on retaining four seats, but in two of the races—Ohio and North Carolina—the incumbent is not running. Holding an open seat can be more difficult, though both states went for Trump in 2020 which is a strong indicator the party can hold onto those seats.

The Democrats, on the other hand, have only nine seats rated as safe and one rated as likely Democrat. This means they need to focus on retaining the remaining four seats, or 28.5% of their seats up for election, including two seats that are rated as toss-ups: Raphael Warnock of Georgia and Catherin Cortez Mastro of Nevada.

With these ratings, there are eight senate seats in play when it comes to control of the chamber.

As mentioned above, there are two “toss-up” seats that are currently held by Democrats, one in Georgia and the other in Nevada. Both of these states went for Biden in 2020, NV by less than 3% and GA by .2%. This means the Georgia seat is ripe for the taking by Republicans, especially given that GA is traditionally a very red state and there is a Gubernatorial race this year where the Republican is projected to win.

If the Republicans can flip the Georgia seat while retaining their 21 up for election, the chamber split would be 51/49.This is not much better than the current split of 50/50 because the party would still need to get all of its members on board in order to pass any bills, something that can be difficult with a few moderate Republicans still in the chamber.

In my opinion, it looks like the Republicans can flip the Georgia seat, but the Nevada one is more of an uphill battle. The Democratic Governor is up for reelection and the state historically votes blue in presidential elections too. Though flipping the NV Senate seat is not out of the question, especially if the Republican Gubernatorial candidate does well and the polling shows that as a possibility. With large margins of error and over 10% of likely voters still undecided, the Nevada Governor’s race is up in the air, which could spell victory for the Republicans in that and the Senate race.

The best-case scenario for the Republicans is they can edge out the Democrats by a seat or two, but that does not mean clear sailing to passing policy once everyone is sworn in in January.